Google Cloud is underpinned by a global network of Google Cloud Platform (GCP) regions that help bring its services closer to users and improve reliability and speed.

In this blog, we look at the rollout of GCP regions and locations worldwide, and explain the benefits of using a direct connection to access them.

Various mixes of these products are available in over 200 countries and territories via 146 network edge locations broken up into 88 zones and 29 regions.

What this means is that Google Cloud services are available in multiple locations across North America, South America, Europe, Asia and Australia.

In the cloud service provider terminology, these geographic locations are divided into regions and zones, so organisations can choose where to locate their applications in order to meet latency, availability, and durability requirements.

Typically, a Google Cloud Platform region will have three or more zones allocated to it, allowing organisations to distribute apps and storage across multiple zones to protect against service disruptions. These zones are physically located in the same or a nearby data centre.

For example, the us-west2 region in Los Angeles has three zones: us-west2-a, us-west2-b, and us-west2-c. Zones are treated as a single failure domain, the idea being that applications are deployed across multiple zones within a region to provide better availability.

Essentially, zones and regions are logical abstractions of underlying physical resources provided in one or more physical data centres. The data centres themselves may be owned and operated by Google, or they may be leased entirely or in-part from specialist third-party data centre operators. However, the idea is still the same in that they are there to provide a uniform level of performance, security, and reliability.

It also announced plans to launch more cloud regions worldwide, including locations in:

Benefits of a direct connection to GCP locations

Google Cloud Interconnect provides access to all Google Cloud products and services from an organisation’s on-premises network (with the exception of Google Workspace), with capacity options starting at 50Mbps and in Console Connect’s case going up to 10G in select data centres.

In terms of direct connectivity options, Google keeps its requirements and components pretty straightforward and is arguably the simplest of the three big players when it comes to extending your on-premises network to Google's network through a highly available, low latency connection.

Fewer hops to your destination means better performance of your applications and a better experience for your users, while the simplicity of a direct connection means you can easily maintain your existing security policies across different networks.

Compared to an in-house dedicated interconnection, you don't need to install and maintain routing equipment in a colocation facility. Network-as-a-Service (NaaS) offerings enable enterprises to interconnect data centres with other Google Cloud assets on-demand and globally, rather than being locked into any single ecosystem.

This gives businesses the freedom to grow quickly in new markets or turn up services across a truly global footprint, fast.

Furthermore, the simplified user experience of NaaS offers real-time visibility into network performance across your GCP and data centre assets. This means you can continually adapt and optimise the network connectivity with granular and real-time control over bandwidth to meet changing needs on an intuitive and intelligent network.

With a network that spans more than 150 countries around the globe, Console Connect is well placed to help you maximise the potential of your Google Cloud Platform assets with real time access to low-latency, secure, direct connectivity.

This means you can set up dedicated connections to your Google Cloud instances and ensure your users get the best and most reliable performance out of your applications. 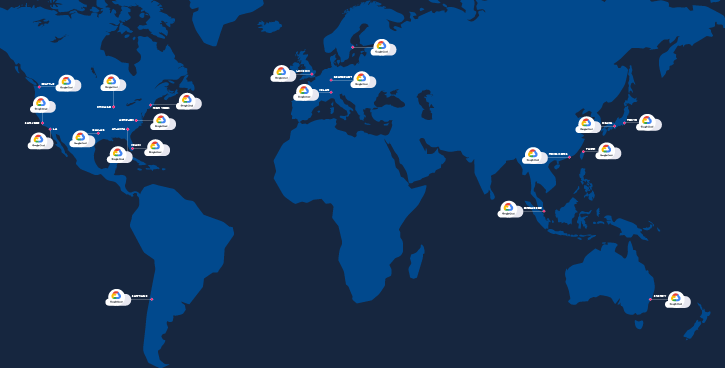 The concept of NaaS reduces complexity of operations with a self-service portal allowing you to manage network connections 24/7 from anywhere in the world.

With no more long lead times and restrictive long-term contracts, you only pay for what you need and can dial your cloud connectivity bandwidth up and down to match your Google Cloud workload.

API integration also means you can benefit from process automation and better integrate with the full range of public cloud ecosystems and infrastructures without needing specialist knowledge.

Whether your organisation has adopted a hybrid or multi-cloud approach, the Console Connect NaaS platform can provide real time access to all the Google Cloud locations around the world, as well as interconnect your Google Cloud assets with your existing data centres and other public clouds. Compliance And The Cloud