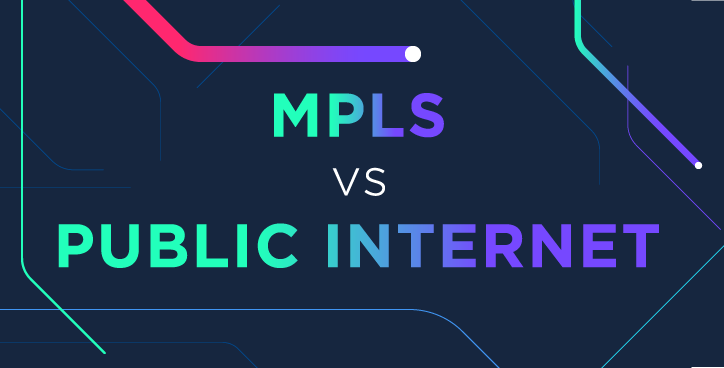 In terms of topology, enterprise IT infrastructure looks very different today compared to ten years ago. In this blog we look at how the acceleration in cloud adoption is causing new network considerations for businesses...

The impact of digital transformation on networks

The maturity of the cloud has led to widespread adoption of - and reliance on - applications hosted by dedicated providers, as well as a partial migration from on-premise data centres to public cloud environments.

The speed at which this digital transformation has taken place has resulted in many organisations becoming unwittingly reliant on public internet connections to access these cloud instances.

In some cases this is because public internet connections are convenient, in other cases cheaper, and on not infrequent occasions because adoption of the Software-as-a-Service (SaaS) in question has happened without the IT department or network manager’s knowledge.

As the enterprise appetite for SaaS and PaaS (Platform-as-a-Service) grew, the public internet offered an all too attractive way of getting access to these services directly from the dedicated provider that hosts them.

Indeed, one of the main attractions of cloud apps is that they often allow employees to bypass official procurement processes and IT involvement and begin using new services immediately.

Various studies have shown that enterprises typically have dozens or even hundreds of ‘official’ cloud-based apps available company-wide - think Office 365, or Zoom, but the number of ‘unofficial’ SaaS tools being used by pockets of employees - think Trello, or Slack - may run into the thousands.

This is of course in addition to the legacy on-premise applications and infrastructure, which is what the traditional WAN was built around.

Connectivity was not designed for cloud

As we have discussed in recent articles, MPLS (Multi Protocol Label Switching) has been the de facto WAN technology standard for several decades. Something of a reliable workhorse, MPLS has long provided organisations with a robust way of connecting branch offices together and to important assets like the private data centre.

Conversely, while the public internet is a convenient and affordable way to deliver application access to a large number of people quickly, it does not meet many requirements around security, reliability and performance.

Some of the shortcomings of the traditional public internet include that:

This can make it entirely unsuitable as a way for enterprises to connect both their private data centres and their public cloud assets. It’s also less than ideal for providing access to cloud-based apps and SaaS solutions, especially those that are mission critical.

That said, adding in multiple Dedicated Internet Access (DIA) lines or extending your MPLS assets is not necessarily going to get you the cloud-friendly structure or the cloud optimised performance that you are potentially looking for.

MPLS is being revived as NaaS

MPLS struggles to adequately support the highly accessible nature of the public cloud because it requires a pre-configured termination point and end-to-end bandwidth management of the connection.

This is more easily done in the corporate data centre where heavy applications are all backhauled through a managed network to a central site, but as the public cloud is owned and operated by other organisations, this approach is not an option.

The biggest challenge with MPLS therefore is its lack of agility. Network operations teams tend to buy exactly what they think they will need in terms of capacity over a multi-year term, without any form of buffer for future traffic demand.

They will then use hierarchical application and service rules to ensure critical traffic is prioritised. Deployment of new sites can take weeks or months and it can be a pricey option when considered at cost per megabit.

NaaS (Network-as-a-Service) is proving to be a game changer with cloud connectivity. This is where Console Connect from PCCW Global comes into its own, transitioning unwieldy network connectivity to match the agility of the cloud with real-time deployment, scaling up and down and working around various different workloads with what is a slightly different flavour of your own private and dedicated MPLS network.

The reason NaaS is able to get things done a lot faster is that it takes care of all of the traditionally manual activity ‘behind the curtain’.

Console Connect sits on PCCW Global’s own MPLS network and applies a layer of abstraction using SDI (Software Defined Interconnect) to allow network managers to set up and tear down dedicated connections on that network from a web interface or API. No calls to account managers, no paperwork, and no waiting time for trucks to roll to a data centre.

NaaS takes a lot of the problems away from connecting data centre to data centre and site to cloud, allowing you to set up and scale your bandwidth between assets in near real-time.

Furthermore, as cloud-based applications become mission critical the dynamic changes and network connectivity, traditionally owned by corporate IT, becomes a key part of the puzzle. NaaS allows you to set up MPLS-like links directly to these cloud apps.

In terms of consumption, we’re also seeing that demand for high capacity access to data centres is often temporary. Let’s say you need to get access to a SaaS provider for a couple of weeks to run certain functions. If you were to do this over a static MPLS-based network it would be a long winded and expensive process, especially if you do not have a presence in the data centre required.

Yet NaaS offers a form of short term connectivity that could just be used and paid for, for a couple of days.